This is a segment taken from the book, Israel's Transformative Black Artists, by curator and writer Charles Moore.

Such a complex and bewildering array of emotions has been showcased in the art of Ethiopian Jewish artists Nirit Takele, Michal Mamit Worke, Hirut Yoseph, Shimon Wanda, Ephraim Wasse, and Tigist Yoseph Ron, who are featured in this book. While all of their art could be classified as social realism, there is wide differentiation in style and nuance, mediums and way they approach their subject.

Let me highlight a few striking characteristics of each artist.

Nirit Takele draws inspiration from life events, memories and profound convictions she wants to convey. She visualizes the characters, shapes and colors she wants to use to fill the space on her canvas. Larger canvases allow for wider and looser movements. Projecting socialist realism, she aims to show the characters as endowed with power, for size expresses their inner strength. She chooses to view her community in this light in contrast to the distorted representation of the Ethiopian community by the mainstream media. Through works like “Mikveh,”“Justice for Yosef Salamesa,” and “Figure in Shape,” Takele challenges the injustices faced by many Ethiopians, whether religious or police related.

Michal Mamit Worke paints from observation. She creates a dialogue by reducing the color palette and flattening the reality presented. Her paintings depict mundane moments that tell a deeper story through the personalities of the central characters emerging as they interact with ordinary situations.

Hirut Yoseph enjoys exploring a range of artistic mediums. Introduced to drawing by her older siblings, and older craft traditions like basket-weaving by her mother, she went on to study fashion in Istanbul, Turkey. This was the start of an international journey, which exposed her to street art, and gave her a fresh vision of building a bridge between the visual imagery in her head and different artistic mediums, creating an entirely new language. In her experiments with wood carving, textiles and embroidery, one thing has remained and that is her storytelling and vivid portrayal of Ethiopian culture.

Shimon Wanda is a muralist, who derives his inspiration from life’s circumstances, emotional stirrings and the dynamics of his environment. The emotive quality of the work has a dark but beautiful side. His choice to only engage in art that speaks to his soul has coalesced into an uncompromising message: life is far from simple—it is filled with many difficulties that should not be ignored. But embracing and learning from these difficulties allows you to create something new and beautiful. Although racism towards Ethiopians in Israel is apparent, Wanda does not let that interfere with his work. Rather, he uses it to fuel his creative process and stretch the boundaries of his work.

Ephraim Wasse, a 33-year-old photographer who lives in Kiryat Yam, believes that art should not be confined to the highbrow in museums but it should be the cultural experience of ordinary folk. An active member in an art collective of Ethiopian Israeli artists, Wasse stresses how his childhood was devoid of any real exposure toart. He now actively participates in a movement to bring art to the people,which is meantto stimulateinterest and dialogue, especially among the young.

Wasse’s photograph “Mother Watching” at a mobileart showin Kiryat Yam is a poignant portrayal of his mother looking out the window of their house, evoking the memory of mothers watching and waiting for their loved ones to return home.

Since his schooldays Wasse’s experience of racial discrimination was just as painful as that of his peers and this has become deeply embedded in his consciousness. He does not necessarily want to define himself as a political activist, but it is something that he cannot escape because it is all around him. In an introspective work called “Breath” his figure draped in a flowing native robe sits in front of a barred window as if to express the need for self expression shackled by the constraints of a white-dominated society.

Tigist Yoseph Ron works around the themes of femininity and motherhood to also deliver a strong message. Her drawings depict a range of personal subjects, from mothers and children to fathers sitting on the edge of the sofa, featuring mostly family and friends. While the portraits are superficially about typical daily activities, they are essentially a social commentary, for instance, mother and daughter in contrast, the immigration crisis, and the discriminatory attitudes of Israeli society.

Her work dwells heavily on the injustices faced by her mother when immigrating to Israel. Growing up, Ron was conditioned to see her mother through the eyes of the society that persecuted her; but as she matured, Ron began to see her mother as strong, noble and successful in her own right. Although western society often portrays Ethiopian women as weak, uneducated and unsuccessful, the opposite is true and that inner strength comes across in Ron’s body of work.

Sit back as they tell their stories so you can have a glimpse into their individual personalities and the elements that shape their art. 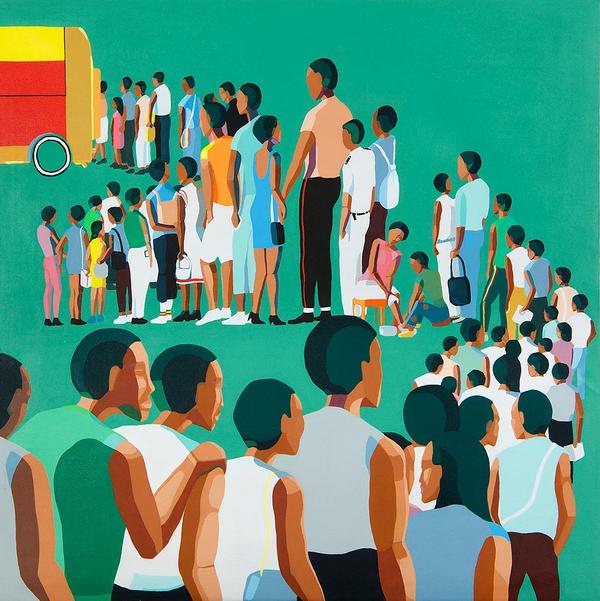